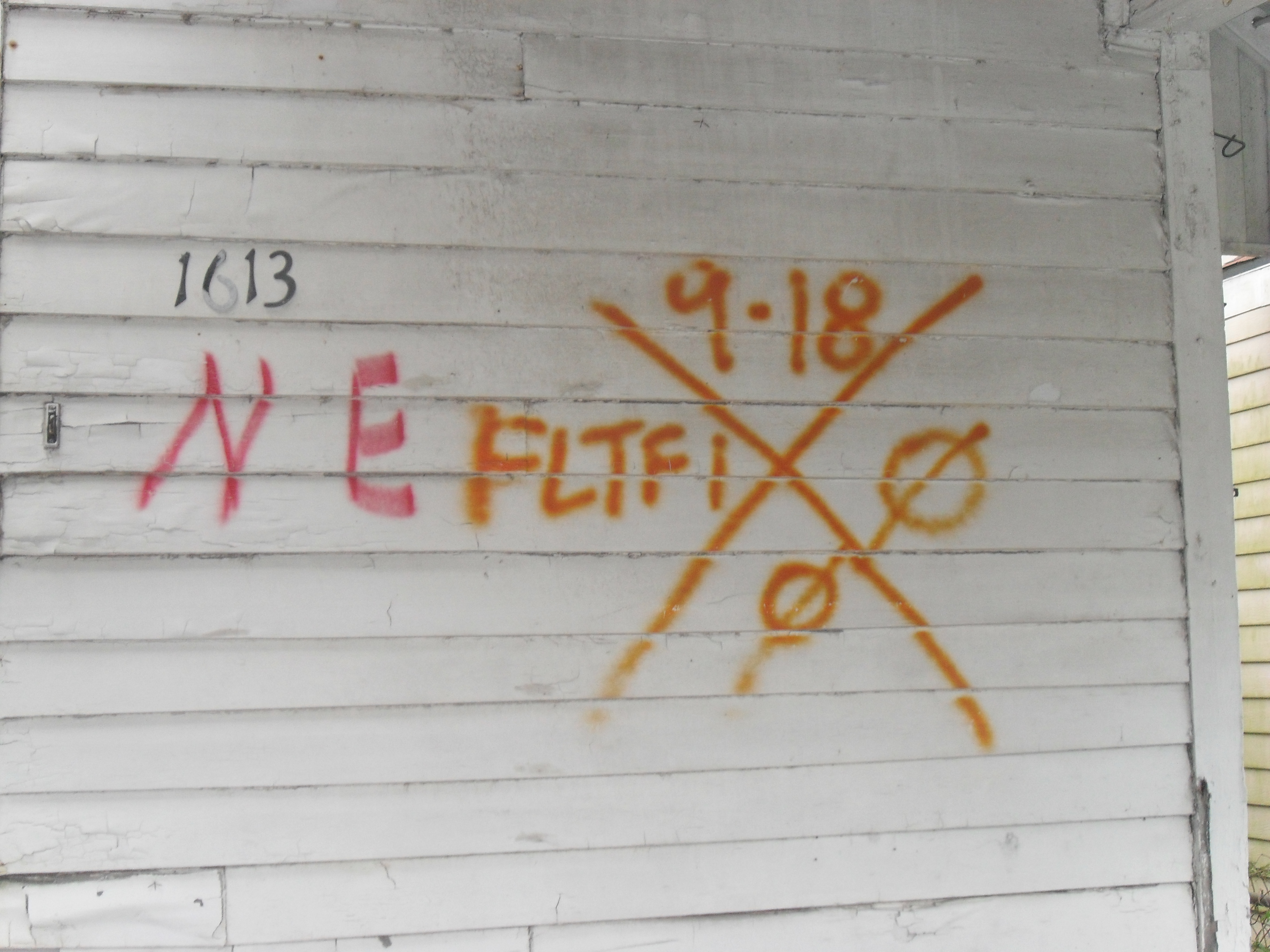 Ten years after Hurricane Katrina devastated the Gulf-Coast region Roger Griffith visits America’s most unique major city New Orleans, during the memorials of the anniversary. In part two he describes in vivid detail the background to the events of the cataclysitic failure of the authorities that led to 1800 deaths and an estimated $151 billion dollars’ worth of damage during the presidency of George W. Bush.

When on the 29th August 2005 Mayor Ray Nagin announced, ‘Ladies and Gentlemen: this is not a test; there is a major hurricane in the Gulf of Mexico. Please evacuate,’ most of the city’s residents had already left, however a large number remained. The residents were used to these pronouncements as year after year warnings came and went. New Orleans had escaped the worst of Mother Nature’s power, apart from the last devastating Hurricane, Betsy in 1965.

The famed Bourbon Street parties were halted and in the nearby city and business district, deals had long since concluded. Everyone stayed indoors as the winds and rain grew stronger. Thousands had heeded the official warnings and sought refuge at one of the city’s symbols, the Louisiana Superdome. The Superdome is a giant indoor arena that seated over 70,000 for American Football games and the home of the chief source of local pride, the then struggling, New Orleans Saints.

Katrina had already caused death and destruction as she weaved her way savagely towards New Orleans. From media reports, the residents had an idea of what was coming but nothing could prepare them for the sheer terror a hurricane brings. Katrina’s storm-rains and winds battered their city tearing strips off the Superdome roof, which allowed the rain to pour in. To those inside it was the noise from hell as the general manager at the time described it as ‘like a rolling monster trying to break in’.

Katrina moved on inland causing heavy rains as far away as Canada and New York. The mass of storm-water it had gathered had nowhere else to go but into the shallow bowl of New Orleans. This created a storm surge that poured into some of New Orleans poorest neighbourhoods, including St Bernard’s Parish, Treme and particularly The Lower Ninth and Ninth Wards which had its homes and community swept away. The failure of the concrete levees left New Orleans 80% underwater. Downtown New Orleans (as the Americans call their city-centres) was more suitable for boats than cars with water reaching as high as fifteen feet. Those that could, clambered onto their roofs for shelter or literally swam for their lives. Makeshift floating vessels of open fridges and containers were used by residents to rescue children, the elderly and the infirm.

After the storm came the sun, and the brutal heat and humidity of a Deep-South summer was restored by Mother Nature. The rolling news media operations of the world converged on New Orleans and beamed back pictures of the destruction and flooding. As the hours passed it became clear that the media appeared to have far better organisation, information and resources than the American government.

It was meant to shelter 15,000 people from the storm with enough food and water to last for a few days. However, up to 25,000 people made their way to the Superdome as Katrina had battered the city, also stripping the Superdome of its roof. What was meant to be a sanctuary became the equivalent of hell on earth for the locals. The power supply failed and inside the occupants were suffocating in the stifling heat, without bathing facilities and with diminishing food and water supplies. Toilets were overflowing with human waste, so people relieved themselves wherever they could. The media carried false reports of shootings, violence and even rapes adding to the sense of hysteria inside and out of the Superdome. They waited for five days in those hellish conditions until the National Guard rescued them. There were a total of six deaths including a suicide but there was fresh hope with a baby born inside the Superdome.

Exaggerated media reports of looting and lawlessness had made the authorities nervous, and troops sent to rescue the stranded were given orders to protect property rather than life, adding to the aggrieved sense of lack of priorities. Governor Kathleen Blanco appeared on TV and said ‘These troops know how to shoot and kill and are more than willing do so if necessary and I expect they will.’

Some people managed to clamber to higher ground and waited on the roads for rescue from the authorities unaware that the buses that should have been mobilised to rescue them were within the disaster zone and underwater. Some walked miles to neighbouring richer areas but were met by armed guards who forced them to return. On the streets it was the survival of the fittest, with water and supplies thrown off the back of army trucks and people left to fight for scarce resources.  So as well as having occupying forces in Iraq and Afghanistan; and just as during the  1960s civil rights battles there were armed troops on the southern streets of America.

Some local residents claim that there was a conspiracy by the authorities to save the more affluent areas by strategically blowing up the levees in order sacrifice the poorer areas. The same claim was made by the local residents after Category 4, Hurricane Betsy hit in 1965, which also left New Orleans underwater.

The cameras continued to portray desperate pleas for help and depicting stranded residents on roofs, dehydrated under the fierce sun ironically surrounded by water. Hotels had, had their glass-front windows blown out by Katrina and fires raged unchecked. The city river was now a vile slurry mixture of petrol, sewage and the floating dead as well as all the wild creatures of the bayous and wetlands such as snakes and alligators pouring into their new city habitat. In the city there was no electricity or fresh water and limited tele-communications.  People roamed the streets, traumatised, many without medication as they waited for FEMA to organise their rescue.

The area around the Superdome and Convention Centre was on higher ground and a natural sanctuary for rescued people to congregate but became and dumping ground for the sick. Tens of thousands of people were left without food, water, shelter or medicine. For several days they pleaded for help, sleeping out in the open at night. Some of the elderly died in their sleep in the streets, but there was no-one to collect the mounting toll of dead bodies piling up on the pavements.

The city of New Orleans passed responsibility for the rescue operation to the state of Louisiana, who thought the government should be in charge through FEMA. 60,000 troops were used to patrol the streets from looters instead of giving priority to aid the stricken.

In times of crisis a nation looks to its leader, but President Bush continued his holiday on his Texas ranch and denied having adequate information to tackle the crisis. Meanwhile his citizens were waiting for assistance and could helplessly watch and wait as two days after Katrina had left, President Bush flew over their heads in Air Force One.

Bush compounded the incompetence by saying of FEMA chief Michael Brown, live on television ‘You’re doing a hell of a job Brownie!’ Brown was a roommate of Bush’s at college and had no qualifications to deal with the emergency operation that followed a natural disaster. The failure of levees was one of the major components in the catastrophe. As one expert said, ‘To blame the levee failure for Katrina would be to blame the traffic if the bridge collapsed.’ The design and construction of the protection from flooding were the responsibility of the American Army Corps of Engineers. The levee failure was put down to poor design, lack of funding and mismanagement.

America continued to watch this dystopian nightmare unfold, live on their television screens. Four days after Katrina, there was still no federal helicopters, boats, armies, planes or transportation organised to help the thousands of people needing help.

When the masses of people emerged from the Superdome and the Convention Centre, they were met with a scene that had turned their city turned into a hellish version of Venice. Many of their streets and roads had been turned into filthy canals and rivers. Already unwashed for days, with blisters and sores on their bodies they saw their city in ruins. Glass and litter were strewn everywhere, buildings were destroyed the debris scattered high and wide. Bodies littered the city and highways adding to the stench in the 100c+ heat. Some were covered in sheets to mask their dignity, but others lay rotting, or floated in the water growing bloated and at the mercy of animals, rats and wild dogs.

Eventually, under the leadership of black Louisianan General Russell Honore, dubbed ‘The Ragin Cajun’ the military began to organise the relief mission. General Honore ordered the soldiers to holster their guns and help the traumatised.

It took days to transport the thousands out of the city. They were herded onto buses and planes across America and were not told where they were heading. In Spike Lee’s excellent HBO documentary, ‘When the Levees Broke’ renowned African-American social commentator and activist Professor Eric Michael Dyson said it was reminiscent of slaves being sold on the auction block, with families being separated, children being sent away.

Roger Griffith is the Author of My American Odyssey: From the Windrush to the White House available from Silverwood Books and is a Broadcaster and Director at Ujima Radio CIC in Bristol and Managing Director of 2morrow 2day Community Consultants.

52 Replies to “AFTER THE HURRICANE. AMERICA REMEMBERS TEN YEARS ON”