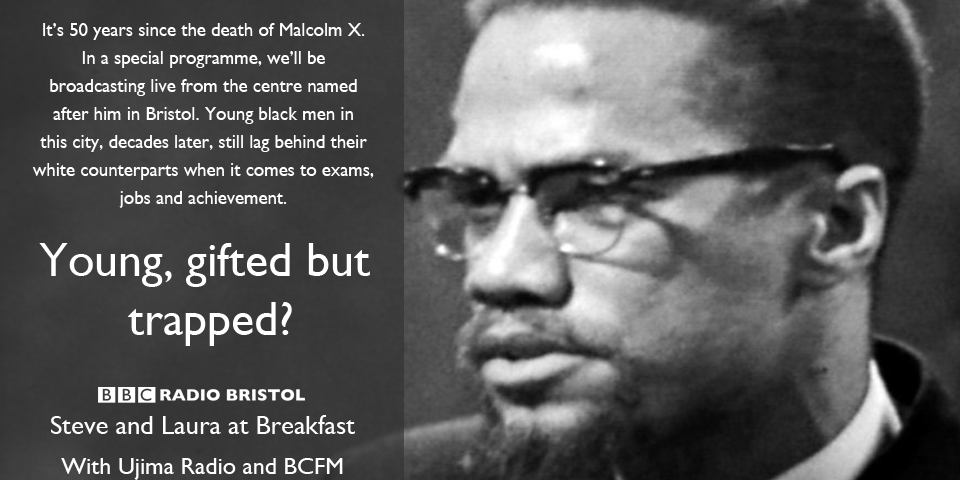 Malcolm X throughout his life was a controversial figure, pimp and preacher, illiterate and icon.  Fifty years on from his assassination in New York, his legacy lives on. Roger Griffith of Ujima Radio explores his life and gives some clues as to why he remains a cultural symbol for many today.

Malcolm Little as he was born was the fourth of eight children in the American Mid-West in Omaha, Nebraska. From the first page of his seminal and living legacy ‘The Autobiography of Malcolm X,’ Malcolm was dealing with the spectre of racism as the Ku Klux Klan confronted his mother who was pregnant with him at the time. The target of the KKK’s visit was his father and Baptist-minister, Earl Little.  They were threatening his father for his outspoken calls to his congregation which included self-reliance inspired by Jamaican Pan-Africanist Marcus Garvey. They forced the family to move on several occasions and after burning down the family home, it is widely believed that white-supremacists murdered his father. His West Indian born mother Helen suffered a nervous breakdown and her children including Malcolm were taken into care. From care he drifted into a life of crime and was jailed, aged 20. It is this backstory of family break-up, crime, drugs and alcohol leading to prison that have special resonance for many over-represented black men, or indeed care leavers that are currently institutionalised and in jail in Britain and America today.

However, how Malcolm Little transformed himself into Malcolm X to become one of the most powerful figures of the 20th century is a story of self-determination, education and finding your own voice, even if it that leads to your own death.

As we see today, Malcolm X too found sustenance in a radical brand of Islam known as the Nation of Islam (NOI), an organisation that preaches black-separatism. Within the harsh realities of the American prisons, the NOI find success in rehabilitating offenders away from a life of crime where many other methods fail. Malcolm replaced his surname ‘Little’ with ‘X’ as he felt his birth name was given by former white slave masters. This was also practised by fellow NOI members and his great friend Muhammad Ali, who changed his name from Cassius Clay. During his seven years in prison he became a voracious reader, learned English grammar and taught himself history. He started discussions and debates and began honing his extraordinary oratory skills which still inspire many of all backgrounds today. At first in line with NOI philosophy, he preached a separatist philosophy between black and white people. In his latter years, however just before his death he made a pilgrimage to Mecca to avow his faith as a Muslim and made friends with blue-eyed white brothers who he had previously called ‘white devils’.

So what of Malcolm today?  ‘The Autobiography of Malcom X,’ ghost written by Roots author Alex Haley provides a great template of inspiration. Heart-breakingly brutal in his description of family life, searingly honest about his criminality and uncompromising on his beliefs about the establishment, yet in the book Malcolm displays the ability not to be dogmatic and changes his uncomfortable beliefs. Neither politician or pop-star, sportsmen or sociologist, it is hard to imagine someone like Malcolm X captivating cultural conversation today as he did then. His lasting message is a call for unity and understanding either by faith or race, and that call to action still remains something we are struggling to deliver fifty years on.

Throughout this seminal year in Bristol on race, there will be a number of events planned at the Malcolm X centre, Watershed, Festival of Ideas and Bristol Old Vic with programmes on Ujima Radio. Different voices will say different things about Malcolm X and what social activism and engagement means for them.

Roger Griffith is the author of My American Odyssey: From the Windrush to the White House, and a Director at Ujima Radio 98FM. He broadcasts every Monday 4-6pm on the Old Skool Cruising Show on www.ujimaradio.com